Ubiquiti recently released their Wi-Fi 6 access points and I was curious to see if it would increase my iPhone 13 Pro Wi-Fi speeds over the existing UAP-AC-Pro and UAP-AC-HD access points I was using. So this comparison review will cover the Wi-Fi speed differences I noticed when upgrading from the UAP-AC-Pro and HD to the U6-Pro-US (Ubiquiti Access Point Wi-Fi 6 Pro).

The Ubiquiti Wi-Fi 6 Pro (U6-Pro-US) is the newer, Wi-Fi 6, version of the previous Wi-Fi 5 Pro access point, the UAP-AC-Pro. Below are some important specification differences between the two wifi access points.

There is a theoretically huge speed performance increase of 3500mbps between the UAP-AC-Pro and the U6-Pro-US at 5ghz and a smaller increase of 124mbps at 2.4ghz.

So the Ubiquiti Pro and LR Wi-Fi 6 APs increase from 3x3 to 4x4 MIMO on the 5ghz radio band. The Pro actually went down from 3x3 MIMO in the UAP-AC-Pro to 2x2 MIMO in the U6-Pro-US. The loss of 2 MIMO antennas in the 2.4ghz band may not materially affect performance because many 2.4ghz devices don't support higher levels of MIMO anyway.

The Pro uses a Qualcomm chipset whereas the LR uses Mediatek.

The UAP-AC-Pro I have currently looks to be the exact same size, 197mm x 197mm x 35mm, as the new WiFi 6 Pro AP so I should be able to use the existing mounting bracket I have in the ceiling.

Below is a picture of the back of each access point. 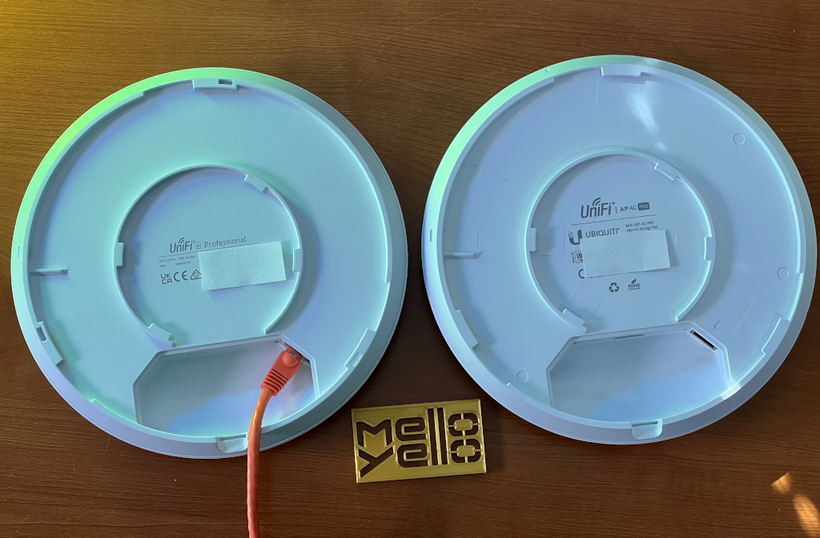 The new Wi-Fi 6 access point feels a lot more substantial between the two. The new Wi-Fi 6 version increased in weight by about 10 ounces over the previous Pro to ~20oz despite the same outer dimensions.

Lastly, the new Wi-Fi 6 Pro requires PoE+ where the UAP-Pro could use either PoE or PoE+.

I setup iPerf3 in server mode on a gigabit hardwired PC on my local network and used the iPerf mobile app with 5 streams to test the Wi-Fi speed of new U6-Pro-US, the UAP-AC-Pro, and the UAP-AC-HD using an iPhone 13 Pro (which supports 802.11ax and 2x2 MIMO). iPerf runs within the local network so it is unaffected by variances in your WAN internet speeds.

The U6-Pro-US access point has a 52% 5ghz wifi speed increase over the previous Unifi Pro based on the iPerf speed tests.

These tests were conducted with 5ghz Wi-Fi channel width set to VHT80 on the the UAP access points and HE80 on the U6 so that speed shouldn't be constrained by wifi channel width. 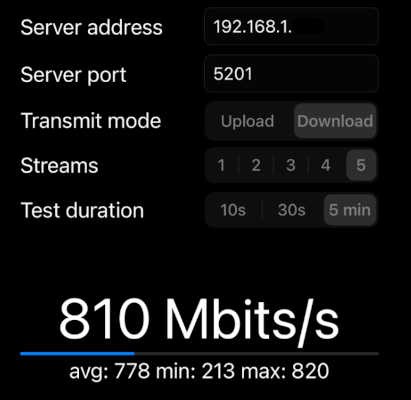 The Wi-Fi 6 version of the Ubiquiti UniFi Pro router, U6-Pro-US, was a worthwhile upgrade over my previous generation UAP-AC-Pro and even HD access points. The 52% performance increase in Wi-Fi speed on 5ghz puts the new access point on par with wired devices on a gigabit network in terms of download speeds.

Reddit user /u/umccanntech came up with this excellent specifications table showing the detailed differences of the UniFi omnidirectional access points.

Guide to automated Visual Regression Testing - Best visual tools, how, and when to use them

Visual regression testing is a QA testing technique effective at catching look and feel or layout regression defects and catching bugs that you aren't explicitly looking for in your tests. These tests can be flaky or high maintenance without the right combination of visual testing tool, platform, and style so this guide will help you pick the best visual regression tool and write maintainable visual tests.

In this review I'll use SwitchBot door contact and motion sensors to setup smart home automation routines using Amazon Alexa and the SwitchBot app to turn on lights when I open the door or shut lights off when occupancy isn't detected in the room.

What to Buy your Model Y

There are a lot Tesla Model Y accessory options out there. Now that my model Y arrived here are my reviews for the best accessories for your Tesla Model Y that you'll want day 1. Benefit from my hindsight.

I've been researching battery-powered power stations or generators as hurricane-season approaches and this review goes over the features of the Oupes 600w, 595wh, inverter power versus similar models from Jackery and GoalZero.

Testing the Flume 2 for wifi water monitoring and leak detection

The Flume 2 provides wifi whole-house water monitoring without requiring cutting plumbing or external power allowing you to see check water usage and get notified of leaks in near real time. Learn about how to install the Flume and my impressions after 3 months.

Nightwatch.js recently released v1.6 which adds support TypeScript for writing your tests! The type definitions appear to be in the DefinitelyTyped project. Click here for my experience using TypeScript with Nightwatch. I know a lot of test engineers were hoping to see this feature added 🦉👍👍👍

Learn how to calculate the best speed to run your variable speed pool pump at to efficiently keep your smart home's pool clean while saving energy and money by determining your gpm flow rate by calculating the total dynamic head without a flow meter.

Amcrest has been releasing 1080p and now 4k webcams at budget-friendly prices throughout 2020 and 2021. This review will setup their latest 4k webcam and test the microphone audio, resolution, and color balance to see if they've improved over their previous webcam models.

Test case management systems that aren't integrated with your automation framework are wasteful. Learn how to integrate Nightwatch automated test results into TestRail automatically in this tutorial with the help of testrail-nightwatch-updater.

Learn how to use Nightwatch.js global variables so you don't need to hardcode values in your test automation allowing them to work in multiple environments and reduce test maintenance costs.

This tutorial will cover how to implement a minimum accessibility test plan against a website using Nightwatch.js and aXe.

TP-Link released a unicorn of a smart bulb for those looking for a smart LED edison filament style bulb perfect for people who like vintage bulbs, but don't want to sacrifice energy savings and home automation features.

How to use SauceLabs with Nightwatch.js

Learn how to configure Nightwatch.js to use SauceLabs for scalable, parallelized, multi-browser automated test execution in this software testing tutorial.

Using SwitchBot to install a smart switch without a neutral

Comparing the Amcrest ProStream AWC2198 webcam to other 1080p models

Amcrest generally puts out pretty decent quality security cameras at a reasonable price, but their webcams have been hit or miss. This review will see if the latest Amcrest ProStream model AWC2198 USB webcam gets it right.

Our local South Florida Test Automation chapter met virtually to go over the Nightwatch.js framework. It was our first virtual testing Meetup in an effort to adapt to the new normal.

Crenova recently released a 1080p (upscaled from 1280x800) projector which makes a great companion for projecting streamed content from smart devices like an Amazon FireTV stick. In budget projectors brightness and sharpness are usually sacrificed. Let's see how it holds up in this review.

Amcrest, normally known for their security cameras, has recently released their second HD webcam, the AWC195-B to meet the demand from remote workers. Their first HD webcam had acceptable video quality, but terrible microphone. In this post I'll review their latest webcam and see if there are improvements to video and audio quality.

Using page objects and commands for repetitive selectors and test code allows you to write maintainable automated test cases. Learn how in this Nightwatch automation tutorial.

With so many people working from home, Amcrest, normally known for their security cameras, has entered the webcam space. Let's see how their first 1080p webcam performs in this review.

How I turned into a Lockdown meme

My friend Bryan just blew my mind with a Lockdown Starter Pack fb post the other day that caused me to realize the pandemic lockdown has turned me into a meme. Let's explore how I won this unfortunate bingo prize.

If you are looking to upgrade your photocell timer plug to a smart outdoor plug this Teckin smart plug review is for you.

🔗 My photos made the news!

I recently was able to get some great photos and drone footage of a PTO fundraiser for the local elementary school that made the local paper!

When writing automated browser tests at the UI using frameworks like Selenium or Nightwatch.js it can be useful to validate your front-end interactions cause the desired changes in the backend database. This tutorial will show you how to use Nightwatch to write database tests against SQL databases.

The Yale smart lock I installed and reviewed a year ago is still the best smart door lock in 2020 in my opinion. See why as I cover installation and operation with Alexa in my post.

The nooie aurora smart LED light bulb may be a solution for color controlled smart lights and a competitor to Philips Hue.

There are quite a few web accessibility testing tools out there, but I thought I'd see if any could fit in with my existing automated Nightwatch tests.

How to fix an unresponsive Unifi Cloud Key

If your Unifi cloud key has a white led, is unresponsive, or hanging at login read on to learn how to fix it.

If you are tired of telling your kids to shut off the lights or like flexible outdoor light scheduling smart light switches are for you.

IoT or smart home devices such as lights, plugs, and security cameras haven't had to best track record for security so before you let them in behind your firewall let's look at how to secure them using VLANs.

I needed some under cabinet lighting that didn't require a switch so I gave this TP-Link KL430 smart light strip a try.

I've been looking at newer browser automation frameworks that might also be written in NodeJS and Nightwatch was a match.

I realized my iPhone and iPad didn't seem to be transferring large files very fast so I set out to see if upgrading my Ubiquiti access point would help.